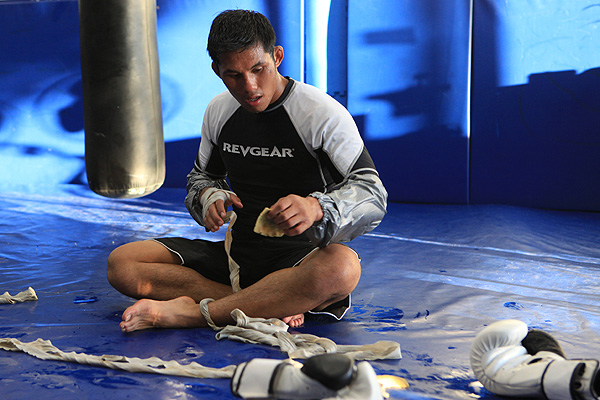 Nam Phan caught the good end of a split decision with his win over Cole Miller at UFC on Fox 4.

Coming off his second victory in the UFC, Phan joined the Sherdog Radio Network’s “Beatdown” show to discuss why he was scared before the fight, his training with Team Alpha Male and his dislike for Steven Seagal.

On whether he is worried before his fights: “I’m not worried. I’m pretty scared. I’m pretty startled and frightened because you don’t know what’s going to happen. It’s unknown. These guys are professional fighters. They’re not a bunch of street thugs. These guys know what they’re doing. ... It’s pretty scary, especially with this fight. Cole, when he walks into the ring, it’s very intimidating. He was punching himself in the face. He had a really pissed off look on him. He was grunting. Plus he’s like 6-foot-3. Like wow, he’s gigantic. Like wow, this guy’s scary. I’m pretty scared. Him grunting like an animal’s not helping either.”

On what he thought when he heard Bruce Buffer announce that the fight was a split decision: “Oh God. I was terrified. Not again. Please, please not again, no, come on. I mean no, I really didn’t think it was that close. Somebody was like, ‘It was a close fight.’ I was like, ‘No. How could it be a close fight? I was cracking him.’ I don’t take anything away from Cole Miller. Cole Miller’s a tough guy, a great dude, but I thought I beat him. I thought I beat him all three rounds. Even the second round, people were saying, ‘Oh man, Nam lost the second round.’ I watched it again. Dude, I was cracking him in the second round, too.”

On why he trained with Team Alpha Male for this fight: “I figured if I wanted to keep my job in the UFC, I’ve got to turn it up a little bit.”

On whether he’ll continue to train with Alpha Male: “Yeah, I think so. The thing is ... everyone at Alpha Male is my size. I think around my weight at least, and they’re either my height or taller or shorter, but everyone’s primarily around 160 to 140. It’s perfect.”

On whether he thinks Steven Seagal really helps Anderson Silva train for his fights: “I don’t think so. But this guy -- you know what? I really don’t think so. I actually think he has nothing to do with Lyoto [Machida] or Anderson Silva’s training whatsoever, but he wants to play it off like he does. He wants to play it off like he’s the success behind [them], like he’s the reason why they’re all successful. If he was joking around, like, ‘Aikido’s front kick.’ Aikido’s front kick is the same thing as a judo chop. It doesn’t exist. It’s funny, but he’s serious, and that’s what pissed me off. He tries to trick people.”

On what would happen if he met Seagal in person: “What could I possibly do? I can’t really do anything. I’m going to beat up a 60-year-old man? I’m not a juvenile delinquent. I’m not going to call him out and start a fight with him either.”

On whether he’d shake Seagal’s hand and speak to him: “No. No, I don’t want to talk to him. Screw that. If he wants to talk to me, if he wants to come over and confront me about, ‘Hey, Nam, why you talking smack?’ then we’re going to have a conversation.”