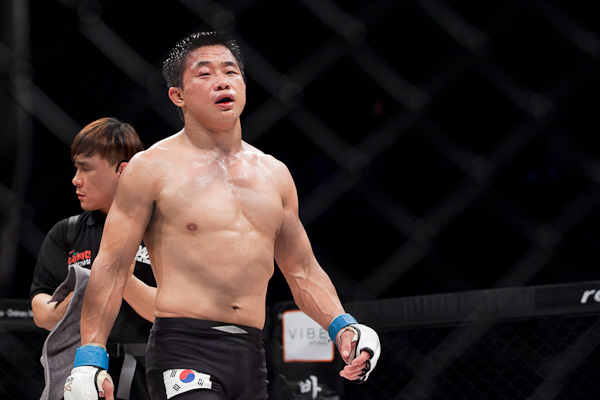 Lightweight prospect Eddie Ng has been forced to withdraw from his scheduled appearance at One Fighting Championship 4 and will be replaced by teammate Brian Choi, promotion officials recently announced.

Ng’s shoulder injury should keep him sidelined for roughly six months, according to a source close to the fighter. Choi will meet Frenchman Arnaud Lepont at the June 23 event, which takes place at Stadium Negara in Kuala Lumpur, Malaysia. One FC 4 “Destiny of Warriors” is headlined by a light heavyweight confrontation between ex-Strikeforce champion Renato Sobral and former Dream grand prix finalist Tatsuya Mizuno.

Nine fights are now official for the card, though former UFC lightweight talent Roger Huerta still stands without an opponent. Huerta was originally expected to square off against Phil Baroni, but the promotion announced this week that Baroni will not be allowed to compete after suffering a June 2 technical knockout defeat at Ring of Fire 43 in Colorado. One FC is expected to announce Huerta’s new opponent shortly.

Choi, 28, began his career with three consecutive victories before being turned away in his most recent outing, a Dec. 3 unanimous decision defeat at the hands of Bae Young Kwon at Road FC 5. “The Polar Bear” has earned two of his three pro victories by way of decision and has yet to be finished in nearly two years as a pro.