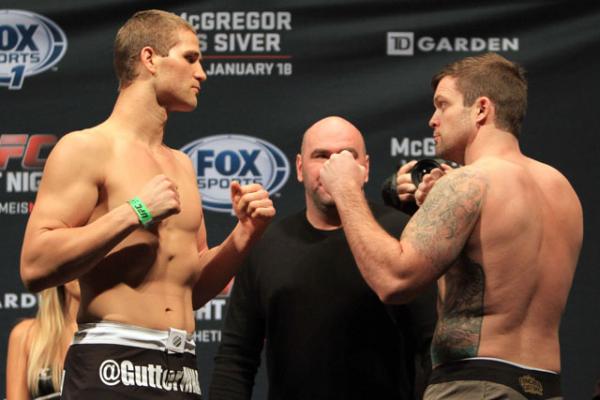 O’Connell and Van Buren had the “Fight of the Night.” | Photo: Jeff Sherwood/Sherdog.com


The second Ultimate Fighting Championship card of 2015 was held at TD Garden in Boston.

McGregor backed up all the pre-fight talk with a second-round technical knockout of Dennis Siver in the evening’s main event. With the win, “Notorious” earned a $50,000 “Performance of the Night” bonus, and earned his shot at challenging for Jose Aldo’s featherweight title. The bonus is McGregor’s third straight post-fight award.

Larkin finished John Howard via first-round technical knockout en route to a $50,000 “Performance of the Night” bonus. Much to the chagrin of the Boston attendees, Larkin looked comfortable with dropping to 170-pounds, finishing “Doomsday” with punches.

Earlier in the evening, Van Buren and O’Connell earned a $50,000 “Fight of the Night” award for their efforts. A veteran of “The Ultimate Fighter: 19,” Van Buren seemed to be cruising after two rounds, but “The Real OC” landed a few big shots that forced the hand of referee Gary Forman, earning his first victory under the UFC banner.