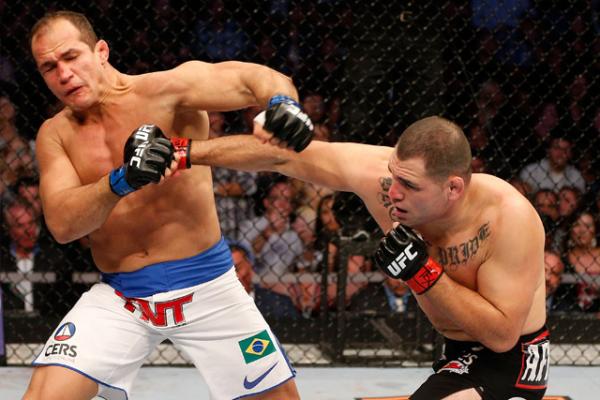 
At this point, a heavyweight title shot against Cain Velasquez seems like nothing more than cruel and unusual punishment. For the second straight fight, the reigning heavyweight king had his way with Junior dos Santos, but unlike their last meeting at UFC 155, this one didn’t go the distance. After battering “Cigano” for the better part of four-plus rounds, Velasquez finally stopped the resilient Brazilian 3:09 into the final stanza of the UFC 166 headliner at the Toyota Center in Houston on Saturday.

While Velasquez is obviously the No. 1 heavyweight in the world, dos Santos once again proved that he is a solid No. 2. The two heavyweights were not the only stars of the evening, however. Gilbert Melendez and Diego Sanchez waged an all-out war that had many calling their lightweight clash the “Fight of the Year” frontrunner. Meanwhile, the likes of Daniel Cormier, John Dodson and Hector Lombard all authored emphatic victories on Saturday night. Here is a by-the-numbers look at UFC 166, with statistics courtesy of FightMetric.com.

9: Knockdowns landed by Velasquez in his UFC career, moving him out of an 11-way tie and into sole possession of eighth place in promotion history. Velasquez floored dos Santos in the third round.

274: Total strikes landed by Velasquez, the fourth-highest total in a UFC bout at any weight class. By comparison, dos Santos landed 62 total strikes in the heavyweight fight.

3: Bouts in which Velasquez has landed more than 200 total strikes. He has accomplished the feat twice against dos Santos in addition to landing 261 total strikes in a UFC 99 triumph over Cheick Kongo. Georges St. Pierre is the only other fighter to surpass 200 total strikes on three occasions.

9: KO/TKO victories in the UFC for Velasquez, tying him with Rich Franklin and Vitor Belfort for third place in promotion history. Anderson Silva (11) and Chuck Liddell (10) hold the top two spots.

2: Takedowns landed, in 13 attempts by Velasquez. In their previous meeting, he went 11-for-33 on takedowns against dos Santos.

224: Weight, in pounds, for Daniel Cormier prior to his matchup with Roy Nelson. The American Kickboxing Academy product tipped the scales at 235 pounds before his UFC debut against Frank Mir in April. Cormier weighed 249 pounds for his first big-show appearance, a Strikeforce Challengers 13 bout versus Devin Cole in January 2011.

511: Significant strikes absorbed by Nelson in his UFC tenure, the most of any heavyweight in the promotion. After taking 74 strikes in a lopsided loss to Cormier, “Big Country” passed Frank Mir (479) for the top spot.

133: Takedowns attempted by Sanchez in 19 UFC bouts, the most of anyone in promotion history. The “TUF 1” winner attempted six takedowns on Saturday to tie Clay Guida for the No. 1 spot.

54: Significant strikes by which Melendez outlanded Sanchez. “El Nino” held the edge over his opponent in every frame, outlanding him 29 to 13 in round one, 27 to 8 in round two and 40 to 21 in round three.

129: Significant strikes by which Sanchez has been outlanded during his last four Octagon appearances. He is 2-2 during that time, with victories over Martin Kampmann and Takanori Gomi and losses to Melendez and Jake Ellenberger.

5: Five knockdowns landed by John Dodson in his last three bouts, including knockout victories over Darrell Montague and Jussier da Silva and a decision loss to reigning flyweight king Demetrious Johnson. “The Magician” floored both Montague and da Silva twice and dropped Johnson once.

16: Significant strikes by which C.B. Dollaway outlanded Tim Boetsch. The Power MMA Team member outlanded his foe in each round and also took Boetsch down three times in eight attempts. However, all three judges sided with “The Barbarian” after three rounds.

57: Total KO/TKO victories combined for Hector Lombard, Jake Ellenberger and Anderson Silva, the only three men to stop Nate Marquardt with strikes in the Coloradoan’s 46-fight career. Lombard was the latest to test the former King of Pancrase’s chin, winning via knockout 1:48 into the opening round of their welterweight scrap. All told, the trio of Ellenberger, Silva and Lombard have earned 60 percent of their career wins by KO/TKO.

11: Average significant strikes landed by Lombard, Ellenberger and Silva their wins over Marquardt. All three bouts ended in the first round.

8: Decision victories in 12 professional appearances for Jessica Eye, who captured a split verdict over Sarah Kaufman in a preliminary women’s bantamweight clash. It was the second split decision triumph of Eye’s career – the first came against Casey Noland at Bellator 51.

38: Total strikes by which Kaufman outlanded Eye. The combatants landed 30 strikes apiece in round one, while Kaufman had the edge in round two (38 to 33) and three (63 to 30).

152: Combined significant strikes landed by Eye and Kaufman, the most of any women’s bantamweight bout since the UFC introduced the division in February. That total far surpassed the combined total of 78 set by Alexis Davis and Rosi Sexton at UFC 161.

9: Significant strikes by which George Sotiropoulos outlanded K.J. Noons in the second (20 to 14) and third (24 to 21) rounds (combined) of their lightweight clash. Noons dominated the striking in round one, however, outlanding his Australian opponent 21 to 6. Noons went on to win a unanimous decision.

1,749: Days since Tony Ferguson’s last submission victory, when he tapped Frank Park with a triangle choke 2:43 into round one at Long Beach Fight Night 3. “El Cucuy” submitted “TUF 15” cast member Mike Rio with a brabo choke 1:52 into the first period on Saturday.

12: Fighters, including Ferguson, who have utilized the D’arce/brabo choke to submit an opponent in UFC competition. Ferguson’s finish of Rio was the quickest using the maneuver, besting Chris Weidman’s submission of Tom Lawlor 2:07 into the opening round at UFC 139.

1-5: Octagon record for Dustin Pague, who fell to the debuting Kyoji Horiguchi 3:51 into the second round of their 135-pound scrap. With the loss, “The Disciple” becomes the first bantamweight to lose five fights in the UFC.