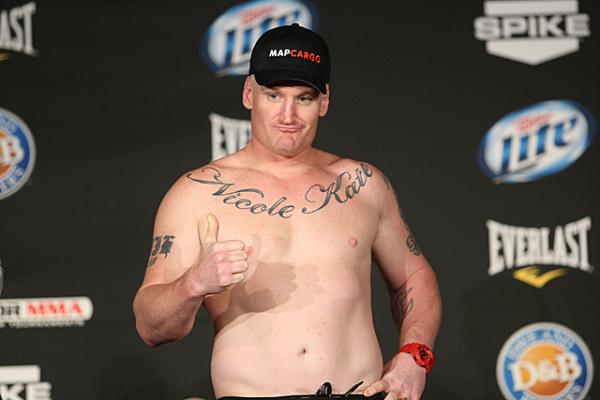 
Peter Graham didn’t deliver any treats to the pro-Mariusz Pudzianowski crowd in attendance at Wembley Arena in London on Halloween night.

Taking advantage of his opponent’s exhaustion, Graham battered the former World’s Strongest Man with hammerfists and elbows to earn a second-round technical knockout victory in the KSW 32 heavyweight headliner. Pudzianowski was given plenty of opportunity to defend himself from Graham’s salvo, but eventually the massive Pole tapped out to the assault at the 2:00 mark.

Round one went more according to plan for Pudzianowski, who took his man down within 30 seconds and proceeded to smother him for the majority of the period. However, momentum shifted when a standup was ordered with less than a minute remaining and Graham (11-9) tagged “Pudzian” with a couple hard punches right at the bell.

Pudzianowki (9-4) was visibly exhausted in round two, and Graham wasted no time in attacking on the feet. Pudzianowski’s only response was to fall to his back, which allowed Graham to go to work with ground-and-pound. When “The Chief” decided to return to his feet, it took some serious effort just for Pudzianowski to follow suit.

Moments later, Graham sent his reeling foe to the canvas once more, and from there, the finish was academic. The defeat snaps a four-fight winning streak for Pudzianowski; Graham, meanwhile, won for just the second time in six outings.

Moments after losing a point for landing an illegal knee, Borys Mankowski submitted Jesse Taylor with a guillotine choke to retain his KSW welterweight strap in the evening’s co-main event. The end came 3:02 into round one, giving Mankowski his fifth straight triumph in the Polish promotion.

Taylor (29-13) was relentless in his pursuit of the takedown throughout, but that approach got him in trouble more than once. Earlier in the frame, Mankowski (18-5-1) was able to transition to side control after being taken down, where he landed several elbows before taking Taylor’s back. “JT Money” resisted the rear-naked choke and eventually escaped but absorbed the illegal knee while shooting for another takedown after a brief scramble.

When the action resumed, Taylor threw a spinning back fist before changing levels, and he found himself quickly trapped in Mankowski’s clutches. The tapout came seconds later.

Elsewhere, James McSweeney took fellow kickboxer Marcin Rozalski out of his element, submitting his opponent with a rear-naked choke 2:13 into round one of their heavyweight clash. The win snapped a two-fight skid for the London native, who initially rose to prominence during his time on “The Ultimate Fighter 10.”

While McSweeney (15-13) ended the fight on the mat, he was equally effective on the feet. In addition to landing multiple takedowns, he roughed up Rozalski (5-4) in the clinch with knees and punches. “The Hammer” set up the finish by rocking his opponent near the fence before flattening him out and securing the fight-ending choke.

Earlier, Tomasz Narkun avenged a previous loss to Goran Reljic in decisive fashion, as he captured the KSW light heavyweight title with a first-round technical knockout victory. Narkun put his foe away with a pair of massive right hands from inside guard at the 1:55 mark.

Moments before the finish, a grin flashed across Reljic’s face after the Croatian fighter landed a couple straight rights during a spirited exchange. That enjoyment subsided, however, when Narkun (11-2) floored Reljic (15-5) with a right hand of his own and then dove into his foe’s guard for the finish. Reljic resisted as long as he could, but eventually Narkun was able to find his mark and force the referee to intervene. In their first meeting, Reljic defeated Narkun via majority decision at KSW 29 in December 2014.

In a battle of up-and-coming lightweights, Poland’s Mateusz Gamrot earned a technical knockout victory over Russia’s Marif Piraev. A barrage of hammerfists from top position brought a halt to the contest 3:21 into round two.

Gamrot (10-0) landed takedowns in both stanzas and relied on stifling top control from there. While Piraev (13-1-1) was able to neutralize his foe from guard in round one, Gamrot took advantage of an apparent leg injury in the second, as he quickly moved to half guard and pounded away for the stoppage.

Jim Wallhead avoided the traps of submission specialist Rafal Moks en route to a second-round technical knockout triumph in a welterweight scrap. A left uppercut-right hook combination from “Judo Jim” sent Moks (10-8) stumbling backward to his seat, and a follow-up left put the Pole out for good at the 2:26 mark of the period.

Moks, who has finished nine of his 10 career wins via tapout, did his best to ensnare Wallhead (28-9) in the first round, as he pulled guard repeatedly and hunted for heel hooks. He nearly had the Englishman for a brief moment, but Wallhead was able to free his leg from danger and resume his standup-oriented offense.

Elsewhere, Oli Thompson defeated Michal Wlodarek via disqualification when Wlodrek landed a pair of illegal knees to his downed foe in the third stanza. After a brief halt in the action, the English strongman, bloodied near his left eye, informed the referee that he was unable to continue and was awarded the victory.

The first two rounds were closely contested, with both heavyweights jockeying for the upper hand in the clinch for much of the bout. Wlodrek (7-1) landed an emphatic takedown early in the third stanza, but committed the obvious foul as Thompson (16-8) attempted to return to his feet moments later.

Maiquel Falcao scored a resounding knockout victory over Brett Cooper in a middleweight contest. A perfectly-placed right cross dropped the former Bellator MMA title challenger, and Falcao landed just one follow-up punch on the mat before the bout was halted 59 seconds into round one.

“Big Rig” was aggressive from the outset, stalking his foe and winging heavy right hands. With Cooper (21-12) backing up toward the fence, Falcao (35-7-1, 1 NC) got his opponent to drop his guard with a two-punch combination before connecting with the decisive blow.

In the evening’s opening bout, Polish prospect Leszek Krakowski kept his unblemished record intact, taking a unanimous decision over “The Ultimate Fighter 9” alum Andre Winner in a lightweight bout. Two judges scored the contest 29-28, while a third saw it 30-27, all in favor of Krakowski.

Krakowski (10-0) utilized a grinding approach to carry him to victory, as he repeatedly sucked Winner into grueling clinch duel. From there he pressed his foe against the fence, landing the occasional short punches and knees. Winner (20-10-1) had some success landing combinations, but his opportunities to engage at distance were limited.