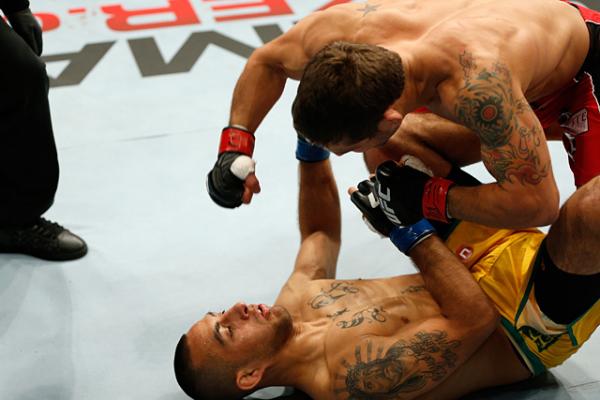 
Chad Mendes has no intention of becoming just another face in the crowd at 145 pounds.

The former featherweight title contender knocked out MMA Lab representative Yaotzin Meza with a wicked overhand right and follow-up punches at UFC on FX 6 “Sotiropoulos vs. Pearson” on Friday at the Gold Coast Convention and Exhibition Centre in Gold Coast, Queensland, Australia. Mendes (13-1, 4-1 UFC) brought it to a close 1:55 into round one.

“Hat’s off to Yaotzin,” he said. “That was short-notice, and the guy stepped up. I appreciate it. I thought I was off this card. I was super pumped to come to Australia when I heard about it, so when I found out my opponent was off the card, I was pretty bummed.”

Meza (19-8, 0-1 UFC), a late replacement for Hacran Dias, never had a chance to establish a foothold in the fight. Mendes leaned on leg kicks and a nice mix of punches before his right hand folded Meza where he stood. A three-punch volley left the Arizonan stiff on the canvas.

“I only got about a week to study this guy, but we saw in some of his past fights that when he threw his jab, he would drop a little bit,” Mendes said. “I was looking to time him, and when he threw that hook, I rolled [off] it and caught him. It was a good punch, I guess.”


Joey Beltran forced Igor Pokrajac to fight him in a figurative telephone booth, as he clinched, punched and kneed his way to a unanimous verdict over the Mirko “Cro Cop” Filipovic protégé in an entertaining undercard showdown at 205 pounds. All three cageside judges scored it the same: 30-27 for Beltran (15-8, 4-5 UFC).

Pokrajac (25-10, 4-5 UFC) was effective when he maintained distance, but too often he succumbed to Beltran’s invitations to clinch. Against the cage, “The Mexecutioner” was on another level, attacking the Croatian’s body and head with relentless aggression. The 33-year-old Pokrajac has suffered back-to-back defeats for just the second time in his career.

“I knew from watching him fight [that he was resilient], so I tried not to get too anxious and gas out,” Beltran said. “I would hit him like 20 times and then grab him, because I knew he wasn’t going to be knocked out. He’s like me but from Croatia.”


Takedowns, ground-and-pound and a suffocating clinch game carried Mike Pierce to a unanimous decision over Seth Baczynski in a preliminary welterweight encounter. The three cageside judges scored it 30-27, 29-28 and 29-28 for Pierce (16-5, 8-3 UFC), a late substitute for injured Australian Kyle Noke.

Pierce struck for multiple takedowns in all three rounds and, despite tiring down the stretch, kept his adversary off balance and frustrated. He was at his best in round two, where he drove Baczynski to the ground with a series of uppercuts from the clinch. The exchange left “The Polish Pistola” bloodied and Pierce comfortably in command.

“He presented a lot of challenges,” Pierce said. “He’s 6-feet-3 and really rangy. I’m one of the shortest guys in the division, so I did my best with what I was given. Persistence and movement: you’ve got to get in and close that distance. Once you’re inside, it’s a lot easier.”


Fiore MMA representative Ben Alloway knocked out Manuel Rodriguez with an exquisite front kick to the face and follow-up punches on the ground 4:57 into the first round of their undercard match at 170 pounds. Alloway (13-3, 1-0 UFC) has won six fights in a row.

Rodriguez (9-4, 0-1 UFC) was in command for much of the bout, as he scored with a pair of takedowns, moved to side control, transitioned to the Australian’s back and fished for a rear-naked choke. His advances were denied. Alloway eventually returned to an upright position and, after a brief break for a low blow, brought it to a close in dramatic fashion.


Mike Wilkinson kept his perfect professional record intact with a unanimous verdict over “The Ultimate Fighter: The Smashes” teammate Brendan Loughnane in a preliminary lightweight affair. All three cageside judges scored it the same: 29-28 for Wilkinson (8-0, 1-0 UFC).

The 25-year-old Wilkinson struck for a takedown in the first round and fired away with punches throughout the 15-minute battle. His aggression and pressure helped to counteract some stellar work from Loughnane (5-1, 0-1 UFC), who blasted his legs repeatedly with kicks in all three rounds and floored Wilkinson with a stinging right cross in the third.


Grudge Training Center export Cody Donovan made the most of his promotional debut, as he put away Nick Penner with first-round punches in an undercard bout at 205 pounds. Penner (11-3, 0-2 UFC) met his end 4:35 into round one.

Donovan (8-2, 1-0 UFC) weathered a pair of knockdowns, the first one resulting from a clubbing right hand to the temple and the second from a ringing left uppercut. The Denver-based light heavyweight kept his cool, answered with a takedown and eventually found his range in the standup. Donovan cracked his Canadian counterpart with a short left hook and followed him to the mat, where he finished it with a series of unanswered standing-to-ground punches.

A short-notice replacement for the injured Eddie Mendez, Donovan has won four fights in a row.